Company Profile and History from 1930

They are importers of Comel Pressing equipment  including Comel Steam Irons, Comel Boilers, Comel Ironing Boards, as well as all types of Sewing Machine parts and accessories.

E.L.Grain are also agents for most other major manufactures including:

Ernest Leslie Grain was one of the senior mechanics at Wilcox and Gibbs Nottingham and in 1930 Ernest left his job with Wilcox and started his own company, E.L Grain Sewing Machines.

The company began operating from a first floor room over his uncle Everard’s plumbers shop, which was on the corner of Bridlesmith Gate and Middle Pavement, now a fashionable shoe shop, where he was joined by an engineer, Harold Bailey.

In 1932 Les, as he was known, moved the company to Clinton Street where they had rooms on the first and second floors. The photo below shows Les working at the bench to the right of the window.

By 1934 Jack Kershaw and Albert Foster, also from Wilcox & Gibbs, joined the company, along with J.Greton from the Singer Company. Later Horace Tunaley and George Howarth, who were two more engineers, joined and the company grew to 11 employees.

1936 was the year in which the company became Limited and saw the start of the manufacturing of it’s own Line Benching and transmitters, which were supplied to the trade.

The fact that the transmitters were the best on the market made it a great success and extra rooms were rented on the ground floor and over the new entrance to Atkeys garage, (Lower Parliament Street, now Wilkinson’s) which became the engineering workshop.

The ground floor was used for the sale and repair of Acme washing machines, which Grain’s had become agents for and as the company had no transport at this time, everything had to be collected and delivered by handcart.

Bernard Deninison joined from Singers and the Sewing machine department was split, one room for Singer and one room for Wilcox.

1938-1939 saw the start of parts for sewing machines being manufactured, these were heavy-duty feeders and plates etc for lockstitch machines, which were required for sewing Army uniforms and anti gas equipment. Hundreds of machines were converted by Grain’s, many for companies within the Nottingham Lace market.

In 1939 E.L.Grain moved premises to High Cross Street, where the staff now totalled 16, which included Ernest Ayre as electrician.

At the outbreak of war only 3 employees were called for service, the rest were classed as reserve occupation, as their skills were important to the war effort.

During the war staff levels increased to approximately 60 as E.L.Grain were contracted to manufacture aircraft parts, which continued for Rolls Royce and Teddington Controls for many years after, along side repairing and rebuilding sewing machines.

1946 saw the start of production of the Grain miniature sewing machine and had an initial assembly line of 6 employees, this continued until the mid sixties when it became no longer a viable product.

In the early 1950’s E.L.Grain began to manufacture their own sewing machine unit stands, which were assembled in Western Street, a premises just down the road, which the company now leased.

In 1963 E.L.Grain built 3 units on Canterbury Road, Radford, which was to be mainly used for the manufacture of sewing machine bench tops to fit to the units.

After the Miniature sewing machines had ceased to be produced the engineering side of the company branched out in a new direction and began to design and manufacture packaging machines.

The sewing machine business continued to grow and the company took on sewing machine sales as well as repairs, as more brands, such as Brother from Japan, became available to dealers.

E.L.Grain Sewing Machines Ltd are still to this day, one of the leading UK suppliers of Brother machines.

After the second world war many firms were looking for ways to continue trading with new peace time products. In the late 1940's the idea of a small sewing machine to be sold for use in every home was fantastic, especially for Grains, as they already manufactured parts for industrial sewing machines. The skilled engineers at Grains, who manufactured aircraft components as part of the war effort, made all the tooling required to manufacture the sewing machines. E.L.Grain were one of several UK manufacturers to produce Singer 20 clones during the 1940/1950's, after the Singer patent ran out.  The first machines were made in 1946 and were stoved in a crinkled black finish and by the 1960's the company had eventually produced over 120,000 machines. According to records only the first 100 machines had serial numbers.

At the outset of sales the machine was advertised as a "BABY SEWING MACHINE" but this was soon picked up as a marketing error and it was changed to a "MINIATURE SEWING MACHINE". The machine was not a toy and indeed worked as well as any chainstitch machine with all models supplied with  a 12 month guarantee. The marketing was done via two independent agents and mostly sold through toy  shops or as a domestic machine, so it became a child's real sewing machine that was used by mum as well. 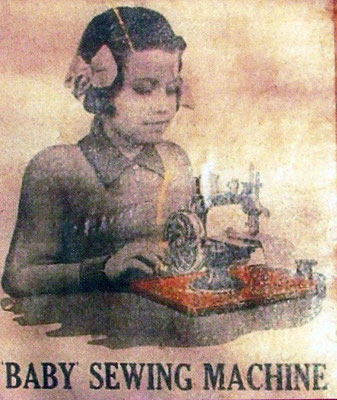 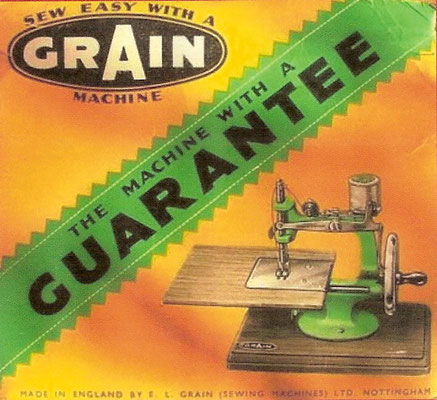 The Machines were supplied in several guises, with the early machines being mounted on a light coloured, varnished, solid wood base and the later models as above with a plywood plinth and curved edges. The price recorded in Which? magazine in 1959 was £3.8s and the GRAIN machine was awarded BEST BUY in the first group, stating "In performance ,   it was as good as the SINGER, better than the ESSEX, had no major disadvantages and was the cheapest of the three".  The use of plywood allowed the manufacture of the elaborate domed cover for the "Travelling Model" which was priced around £4.9s. (photos below) 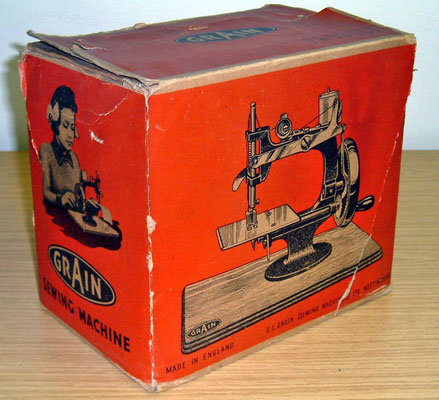 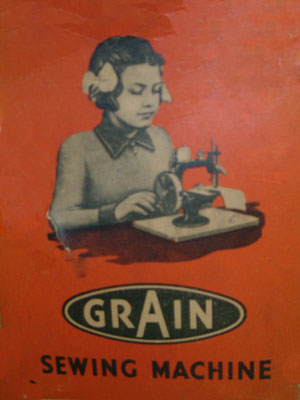 The top of the range portable was known as the "Custom Model". This came complete with extension platform, an accessory drawer underneath and the domed plywood cover. This model cost £5.9s 11d. 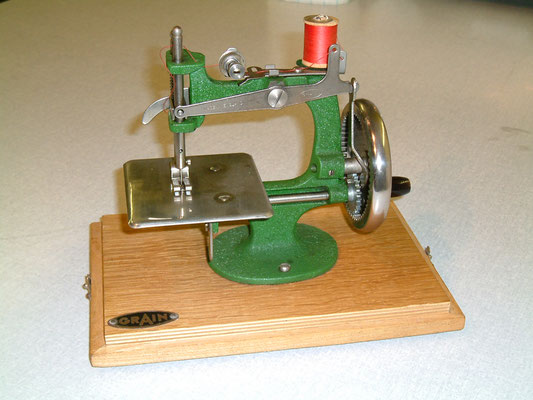 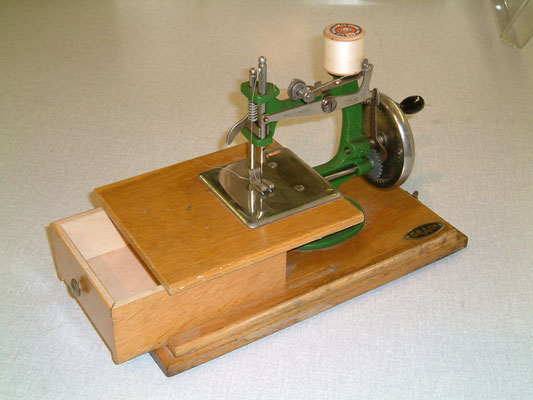 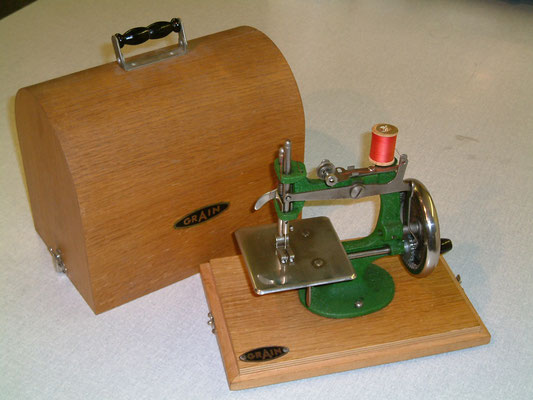 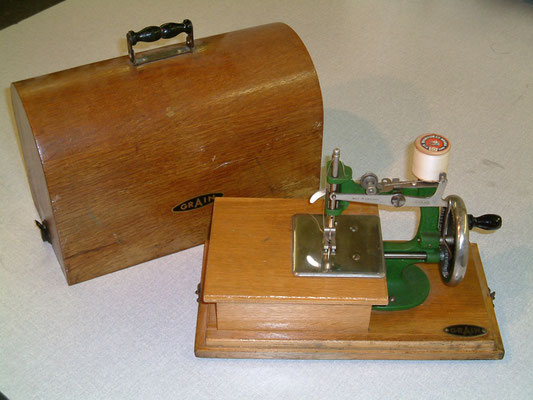 The piece-de-resistance was undoubtedly the "Consul Table Model" which combined the Grain Sewing Machine with a contemporary occasional light oak finish table which would enhance any room. The table top was two piece which slid open to reveal the machine stored below and created a wide work table for machining on. 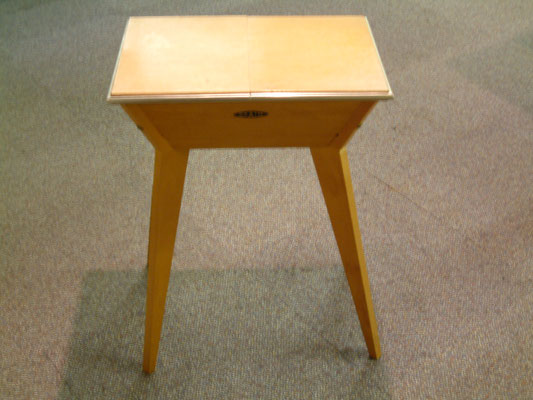 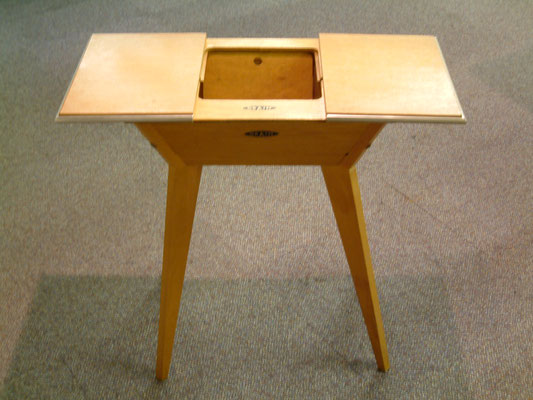 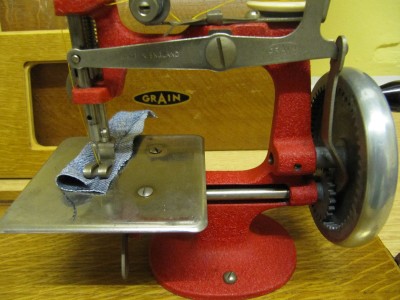 The machine heads had a very distinctive stoved finish, mainly in green,   though other colours do exist. Red appeared particularly on the Consul Table Model, which at the top of the range retailed for a massive £9.9s !

All machines supplied had an instruction book containing a threading

diagram with instructions for beginners.

to download or view a copy. The needle for the machine is a standard

they never really took off the way the original machines had done in the past.

engineered for the market they were aimed at. The new model used

phosphor-bronze oil light bushings which added to the production costs.

finished in grey, as below. The later models were a cream colour with a die

cast base covered in a red vinyl wrap. 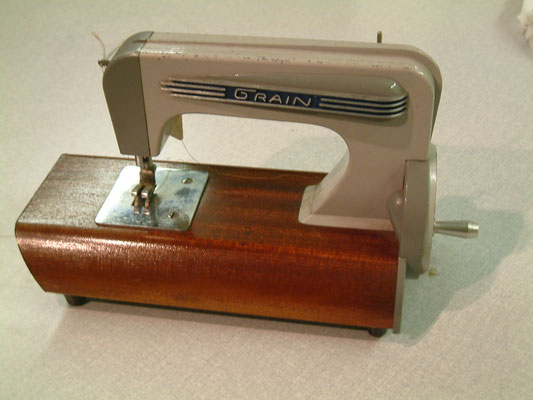 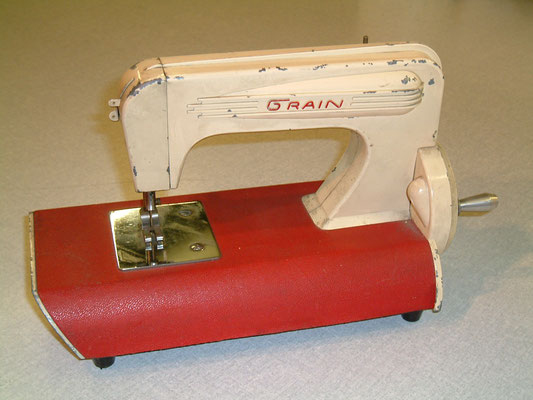 With the selling price of the Grain Mk11 now being almost as much as an adult machine, sales began to fall. The cheaper Japenese imports were taking over as Japan's manufacturing capacity grew and grew, fuelled by the American investment after the end of the second world war.

Around the mid to late 1960's production of the Child's Sewing Machine,           the "C S M", as the production was known within the company, eventually drew to an end.