Recognised for its celebrity-endorsed sales, food hall and signature green
bags, Harrods is one of the world's largest and most famous department
stores.

With more than a million square feet (90,000 sq m) of space, Harrods sells
luxury and everyday items across seven floors and 330 departments. 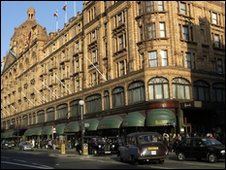 Its motto is Omnia Omnibus Ubique - All Things for All People, Everywhere -
and the store attracts 15 million customers each year.

The Knightsbridge store was established in 1849 by Charles Henry Harrod .

Beginning in a single room and employing two assistants and a messenger boy, it mainly sold tea and groceries.

He ran this one-room shop in conjunction with his city business. He retired from the shop in 1864, having sold it to his second and eldest son Charles Digby Harrod (1841–1905) .

Harrods steadily expanded, and by 1880 was a thriving department store,
offering everything from medicines and perfumes to clothing and food and
attracted wealthy customers.

Its expansion suffered a knock in 1883 when a fire destroyed the store. This
did not halt the owners, however, who duly rebuilt the store, with the help of
architect Charles William Stephens, into what it is today.

Known for its grandeur, when the store reopened it had a palatial style,
featuring a frontage clad in terracotta tiles adorned with cherubs, swirling Art
Nouveau windows and was topped with a baroque-style dome.

Harrods became a public company in 1889 and by the 1890s it had established a
bank and estate agency and a department selling exotic pets that lasted until
the 1970s.

It featured one of the world's first escalators in 1898.

Britain's firs escalator or moving staircase is installed, to the amazement of the public. Attendants are stationed at the top of the escalator ready to offer nervous customers smelling salts or a tot of brandy!

During World War II, the store transformed itself from selling luxury goods
to making uniforms, parachutes and parts for Lancaster bombers.

In 1985 the store returned to private ownership when Egypt-born Mr Al Fayed
and his brother Ali bought House of Fraser for £615m, snatching it from mining
conglomerate Lonrho. 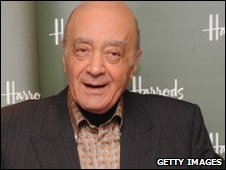 Mr Al Fayed bought Harrods with
his brother in 1985

The takeover bid was bitterly fought as Mr Al Fayed had previously served on
Lonrho's board but left nine months later after a disagreement.

Lonrho's director, the late Tiny Rowland, took his campaign against the
takeover to the Department of Trade who duly held an inquiry.

The subsequent report, issued in 1990, concluded that the Al Fayeds had lied
about their background and their wealth.

"We are satisfied that the image they created between November 1984 and March
1985 of their wealthy Egyptian ancestors was completely bogus."

The public feud between the businessmen appeared to reach reconciliation in
1993 however Mr Rowland later accused Mr Al Fayed of breaking into a safety
deposit box held at the store.

This dispute was later settled with Mr Rowland's wife after his death.

Harrods has twice experienced bomb attacks by the IRA. In 1983,
six people were killed and 75 injured after a car exploded in an adjacent
street while in 1993, four were injured when a bomb was placed in a litter bin
outside.

The store controversially introduced a dress code in 1989 which included a
ban on wearing high-cut, Bermuda or beach shorts; swimwear; cycling shorts and
flip flops or thong sandals.

In 1994, the Al Fayed brothers let go of the other House of Fraser businesses
in a stock market flotation, keeping only Harrods.

By 2000, the Harrods empire had expanded to take in outlets at airports and
on the QE2 cruise ship.

Mr Al Fayed also added his own personal touches to the store, such as the
Egyptian Room, which is adorned with several busts of himself.

Following the death of his son, Dodi, and Diana, Princess of Wales, in a car
crash in August 1997, Mr Al Fayed created a memorial to the couple in the
store.

He also made a series of allegations about the circumstances of the death and
the British Royal family.

In 2000, Mr Al Fayed decided to not renew his royal warrants, saying that
since neither the Queen, nor Prince Charles had shopped in Harrods for several
years, continuing to display the Royal Crescent would be "totally misleading and
hypocritical".

Harrods now employs about 4,000 staff. The sale includes all parts of the
group, including Harrods Estates and the charter aircraft service Air Harrods.